Hong KongEditor’s note: CNN has launched the Meanwhile in China newsletter, a three-times-a-week update exploring what you need to know about the country’s rise and how it impacts the world. Sign up here.

China’s longest-serving ambassador to the United States, Cui Tiankai, has announced he is standing down after eight years, adding another layer of uncertainty in the relationship between the two great powers.
Cui, 68, whose time in Washington spanned the presidencies of Barack Obama, Donald Trump and Joe Biden, has been witness to a profound shift in US-China relations. During his tenure, Beijing has grown increasingly confident and assertive, demanding that it is treated as an equal. Washington, on the other hand, has become wary of China’s rise, seeing it as a strategic rival and potential threat to the US-led world order.
“Relations between China and the US are at a critical crossroads, with the US engaging in a new round of restructuring in its government policy towards China, and it is facing a choice between cooperation and confrontation,” Cui wrote in afarewell letter published on the embassy’s website Tuesday.
And until his yet-to-be-announced successor arrives, neither Beijing nor Washington will have a top envoy in each other’s capital.
The former US ambassador to China, Terry Branstad, left Beijing last year before the November election. Nicholas Burns, a former diplomat, is a top contender to fill the role, but the Biden administration has yet to make a formal announcement.
The unusual diplomatic vacuum is just the latest sign of the ongoing breakdown in formal relations in what is considered the world’s most important bilateral relationship.
Under the Trump administration, tensions between the US and China flared across a range of fronts, from trade to technology, geopolitics and national defense.
And with Biden casting China as an authoritarian rival to Western democracy, while seeking to form an alliance to counter Beijing, tensions are likely to further escalate.
Cui, who has stayed on well past the traditional retirement age of 65, is widely seen as a rare stabilizing element in this volatile mix. He is typical of China’s old-school diplomats, adept at expressing a firm stance in a moderate manner and measured tone. And that sets him apart from Beijing’s younger and growing cohort of “wolf warrior” diplomats, known for their aggressive defense of China and hostile public attacks of its critics.
In March last year, Cui famously denounced the conspiracy theory promoted by his colleague Zhao Lijian — a foreign ministry spokesperson and the face of China’s “wolf warrior” diplomacy — that the coronavirus originated from a US military lab. “How can we believe all these crazy things?” he said in an interview with “Axios on HBO.”
Cui is widely tipped to be succeeded by Qin Gang, a career diplomat who currently serves as a deputy foreign minister responsible for overseeing European affairs. Qin is seen as a trusted aide of President Xi Jinping, having accompanied the Chinese leader on many overseas trips as his chief protocol officer.
But unlike Cui, Qin has never been an ambassador and has no direct experience with the US.
Before Cui was dispatched to Washington in 2013, he already had close dealings with the Obama administration during his four-year stint as the foreign vice-minister in charge of the Americas and Oceania.
But for Qin, it is a much more difficult time to build bridges in Washington, which has taken a bipartisan hardline stance toward China.
Under increasingly strained relations, there is very little room for the Chinese ambassador to maneuver, as all important policies and decisions will be made in Beijing. But Qin can still make a difference by not further damaging relations with inflammatory remarks, like some of China’s “wolf warrior” diplomats have done in other countries.

Photo of the day 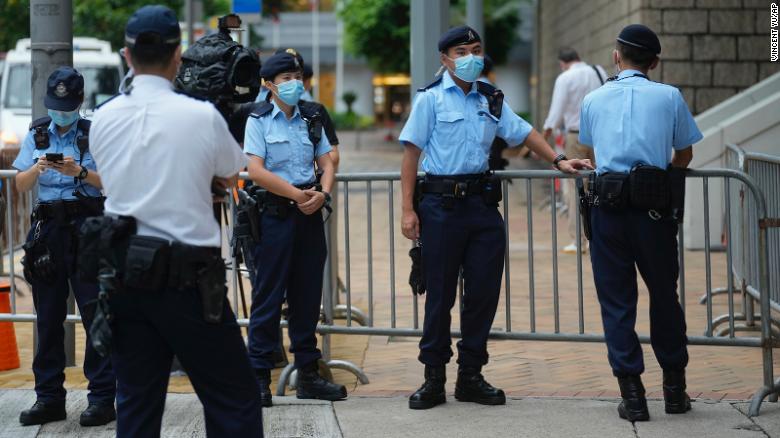 A watershed trial: Police officers stand guard outside the trial of the first person charged under Hong Kong’s controversial national security law. The trial of Tong Ying-kit began on Wednesday without a jury, in a marked departure from the city’s common law traditions.
Tong, 24, pleaded not guilty to the two charges of inciting secession and terrorism. He was arrested on July 1 last year after allegedly driving his motorbike into a group of police officers at a pro-democracy protest, less than 24 hours after the sweeping new law came into effect. At the time, he was carrying a banner with the popular protest slogan “Liberate Hong Kong, revolution of our times”– which is now ground for inciting secession under the new law, prosecutors said.
Tong also faces an additional charge of dangerous driving causing grievous bodily harm.

A crackdown in China is roiling cryptos

China’s crusade against cryptocurrency is driving bitcoin to its lowest levels since January.
Bitcoin, the world’s biggest crypto, briefly fell below $30,000 on Tuesday as China further curbed mining activity and told major payments platforms and lenders that crypto trading won’t be tolerated.
This isn’t a new strategy for Beijing, which has for years forbade financial and payment institutions from transacting with bitcoin and called out cryptos for posing risks to financial stability.
But the country has lately been picking up the pace of its anti-crypto campaign.
Crypto prices dove by double-digits in May after Beijing said it would “clamp down on bitcoin mining and trading activity,” pushing some miners to suspend business. Crypto mining is a critical step in the process needed to put more of these coins in circulation, and China accounts for the lion’s share of such activity.
Over the weekend, Chinese state media reported that Sichuan province, a mining hub, had ordered a halt to all crypto mining operations and cut off the power supply to many mining facilities. And on Monday, the People’s Bank of China said it summoned digital payments giant Alipay and a slew of big commercial banks to warn them against crypto trading.
Bitcoin has since recovered a bit since its Tuesday plunge, now trading just below$34,000. But it is still way, way off the all-time high of nearly $65,000 per coin that it hit in April, and analysts are warning of more volatility ahead.
“Bitcoin is in the danger zone,” wrote Edward Moya, a senior market analyst at Oanda, in a research note. If the value of the cryptocurrency plummets past $29,000, he warned an even further drop to $25,000 could come quickly.
https://airchinatollfree.blogspot.com/2021/06/soon-neither-us-nor-china-will-have.html
Acubeias ias institute PREV POST
Tassnim James NEXT POST